I’m an easy guy to get along with, but when it comes to the calendar, I’m a bit of a contrarian. Case in point: Valentine’s Day. Though this probably secretly drives my wife nuts (like consecutive -ly adverbs drive me nuts), I think Valentine’s Day is a bunch of crap. I realize how Scroogey— 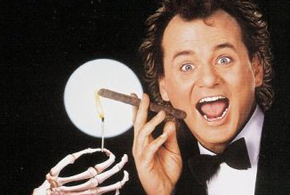 (And by the way, is there an iconic Valentine’s Day curmudgeon analogous to Scrooge? I didn’t think so. See, that proves my point, doesn’t it? How can a holiday be a holiday if it doesn’t incite venomous, irrational opposition from someone? Christmas has Ebenezer Scrooge. Halloween has crazed religious folk who believe trick-or-treating will lead to animal sacrifice and demon worship. Heck, even Arbor Day has the Angry Lumberjack Society, a group of bearded, axe-wielding men who crash tree-planting ceremonies and violently scale saplings.)

—that makes me sound, but there it is. I believe Valentine’s Day provides men who are aloof and inattentive to their women all year the chance to pretend they really do care. “See, Honey? These chocolates prove I really do love you! And the flowers I had delivered…well, don’t they erase that time I took you to Applebee’s and instead of interacting with you, I spent forty-three unbroken minutes texting and checking the Celtics score on my iPhone?”

So what does that have to do with New Year’s Resolutions?

But I’m reminded of Valentine’s Day because even though I give in and do something for my wife on that abomination of a holiday, I can’t stand the concept of it.

And I feel the same way about resolutions. Oh, not for others—others can do whatever the heck they want—I just mean for me. Personally, I feel like I should make resolutions when they need to be made and stick the heck to ’em. The calendar shouldn’t dictate my self-help schedule. The calendar should butt out. I’ll make a resolution to make origami swans on April 17th if I want to. I’ll spend the summer solstice figuring out how to clip my toenails more often (after all, how do I explain to my four-year-old daughter the importance of personal hygiene when my toenails look like Jim Carrey‘s in Dumb and Dumber?).

You get the point.

So…to contradict every single thing I just said, I’m going to make a couple New Year’s resolutions this year. Why? Because my calendrical contrarianism doesn’t own me either! I’ll ignore my arbitrary and ridiculous stances if I want! Got a problem with that? DO YA?!?!?

Resolution #1: Run more regularly. I lift three times a week, but I say I’m going to run three times and end up running once. Sometimes less.

I want to live for a long time, and if there’s any way to increase those odds, I better darn well do it. We have a treadmill and a television on a swiveling wall mount. I’ve got the

DVD player hooked up, cable wired in, and the capacity to listen to Stephen King‘s Dark Tower books through the treadmill’s speakers. Basically, the set-up does everything but make my legs move. I need to do that part.

Resolution #2: Write every day. Some people are like Mozart or Shakespeare or Mila Kunis (well, being hot is a talent, too, right?). They’re just born with better cards than most of us.

I’m not like that. I’ve got some talent, but most of what I do comes from hard work and study, and if I’m going to be the best writer I can be, I’ve got to stay sharp. Oh, I read every day, and I do something related to writing every day, but do I actually produce prose every day?

Nope. And that needs to change.

Resolution #3: Be in the moment more often. This one is something I always strive for, and it’s something at which I often fail. Because I’m human and frightfully prone to forgetting—

—and that’s EXACTLY what I’m talking about. My son just came in with a drawing of his latest invention (a coffee machine that resembles a medieval torture device but will apparently lift the coffee to one’s lips so the fatigued morning coffee-drinker doesn’t have to exert himself…you know, that’s actually not a bad idea!).

When he entered the room (he’s supposed to be in bed), my human (read: stupid) urge was to tell him to go back to his room so I could finish this blog post. But then I looked into his huge, hopeful eyes and realized that he had drawn this monstrosity for me, and that the whole time

he slaved over it (and the detail was amazing—all sorts of cranks and digital read-outs and what might have been a cat-o-nine-tails) he was imagining my reaction. I need to do a better job of remembering that he feels that way just about all the time, so I darn well better give him (and my two daughters) that total attention just about all the time.

So there you have it. Three resolutions from a dude who hates New Year’s resolutions. Let’s see how long it takes for me to break one…

Okay, so I’m not running tonight, but I was in the moment with my son and his coffee machine.

6 thoughts on “New Year’s Resolutions from an Anti-Resolutionist…”