Skip to content
Posted on June 9, 2013 by Jonathan Janz

I’ve made no secret of the fact that I love Joe R. Lansdale. If you haven’t been around these parts before, you can check out this blog post for proof.

You might also notice that I said I loved Joe himself (or Hisownself as we like to call him) rather than just saying I love his books. But for me it’s all the same thing.

I’ve got an addiction—a fever if you will—and no, it’s not for cowbell. It’s this consuming need I have for more of my favorite fictional duo of the past twenty years. 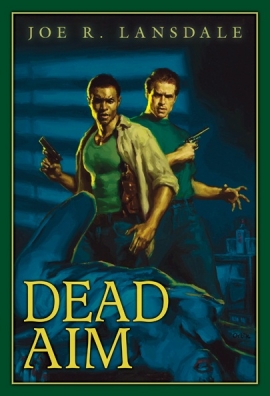 I really hoped, at one time, that Jeff Bridges would play Hap and Samuel L. Jackson would be Leonard, and though I suppose that’s still possible, because of those actors’ respective ages the films would have to be made out of order. You know, there would be some prequels with different actors and all that stuff. And that would be fine with me if Hollywood went all George Lucas on Hap and Leonard and made Book Four after Book Eight and Book Two before Book One. As long as the movies get made, I’m good.

But back to loving Joe R. Lansdale. My reasons for saying this are because a) he seems like a great guy, b) because he has the coolest voice this side of Ray Winstone, and c) he tends to take care of his fans. See, we’re like Lansdale Junkies, slavering like mindless zombies for our next bite of Joe’s brain, and we’re especially this way with Hap and Leonard. I don’t expect Joe to write three Hap and Leonard books a year (though I certainly wouldn’t complain), but it’s like he senses when I’m starting to get desperate for my next Hap and Leonard story. Then he obliges.

In other words, there are certain things you just have to experience to believe.

Read Dead Aim. It’s vintage Hap and Leonard. I’m a slow reader (often pausing to highlight words or write down notes), but even I did this novella in three sittings. You’ll probably swallow it in one. You’ll love the way Hap and Leonard talk. You’ll love how down-to-earth they are but how heroic they can often be. You’ll laugh out loud (and nope, I’m genetically incapable of turning that into an acronym) at the things they do and say. You’ll be buttocks-tightening nervous when they get themselves into a hairy situation. Most of all, you’ll be totally entertained.

Thanks, Joe, for providing a zombie like me with such a great story. Until the next one, I’ll be moaning and salivating at your front gate.