Hey there, Peeps. It’s a lovely summer’s day, my son’s starting his first day of nature camp, my wife is playing the piano upstairs, and my daughters are smuggling potato chips into a closet and eating them.

Oh, and I’m down here in the basement lifting weights. Actually, I’m bench pressing without a spotter. It’s one of those things you tell your kids not to do—like smuggling potato chips into a closet and devouring the entire bag—but you go ahead and do it anyway. I don’t know how many times I’ve gotten the bar stuck on my chest, but it’s probably nearing double digits. I’m not a power lifter or bodybuilder by any means, but I do work out with substantially more than I weigh, which means when I do get the bar stuck on my chest, getting the dang thing off is a dicey and time-consuming proposition.

Some of you know what I’m talking about, right? You can’t let the bar roll up your chest, because that would mean letting it crush your windpipe. I’ve never done that, but the prospect has never appealed to me. I suppose you could let it overbalance one way or another so you can sneak out one side, but I use clamps on the bar, so that wouldn’t accomplish anything. Plus, there’s a dryer on one side of me and a pile of toys on the other. In fact, just the other day I crushed some doll’s face with the corner of the bar. I tried not to take it as an omen.

So you roll the bar down your body, undulating as much as you can with it. The undulating doesn’t do much good, but it does help you fight the claustrophobia threatening to send you into a mind-destroying panic.

Who am I kidding? I start panicking the moment that bar begins squeezing down on my chest. You know, the more I think about it, the more I wonder whether Poe was a bench presser. I suspect he got the inspiration for “The Premature Burial” while trapped under a set of wooden barbells. Remind me to research that later. But the point is, you feel buried under that bar. Trapped. And even when you manage to muscle that bar over your tummy and your hip bones, you’ve still gotta somehow work it over your midsection without doing serious distress to your reproductive equipment. You wanna talk about terror? True terror is the moment you shove that bar down your thighs, push backward with your feet, and try to let the bar slam down on the bottom of the bench without pinning anything delicate beneath it.

Anywho, the reason I’m blogging today has nothing to do with weights or potato chips or accidental neuterings. What I’m here to tell you about is what you can get tomorrow for a little over a buck: 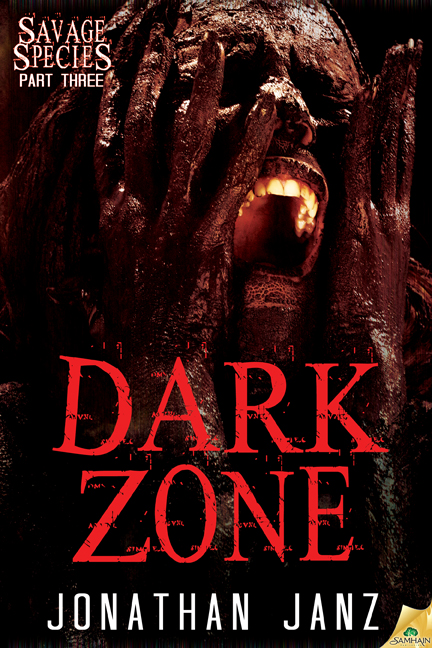 The above cover is for the third installment of my serial horror novel SAVAGE SPECIES. As you can see, this one’s called DARK ZONE, and it’s called that for several reasons, not the least of which is the fact that the entirety of the installment takes place underground. Our main characters—Charly, Sam, Jesse, Emma, Red Elk, and others—are trapped in a subterranean labyrinth with not one, but two species of creatures who only want one thing: their blood. And now that I think about it, I guess the whole pinned-under-the-bar tangent did have some relevance, didn’t it? I’m not sure about the potato chips, but I suspect one of my characters is fond of them. Probably Red Elk. They’d go nicely with his pizza-and-beer diet.

Pick up the free first installment of Savage Species (Night Terrors) right here (or anywhere else ebooks are sold). You can grab the second installment wherever you want, too.

So get on board the SAVAGE SPECIES train, Friends. The reviews have been off-the-charts awesome, and word is spreading fast. Not only is Samhain Horror’s first serial novel kicking butt in America, I checked Canada, Germany, France, and Japan last night, and the book is rocking in those countries as well.

Now I’ve gotta go finish my workout and head upstairs to write. I’m working on something top secret right now. I can’t say what it is yet, but I’m enjoying the heck out of it.

4 thoughts on “Get Ready for the World to Go Dark…”