John W. Campbell‘s WHO GOES THERE? is one of those stories that’s more famous for the movie (or in this case, the movies) it inspired than it is for its merits as a great piece of fiction. And it is a great piece of fiction. Any fan of the films made from WHO GOES THERE? (particularly those of you who are like me and have an affinity for John Carpenter‘s 1982 classic of claustrophobic horror and heart-pounding tension THE THING) needs to read Campbell’s story to see the origin of this fantastic idea. 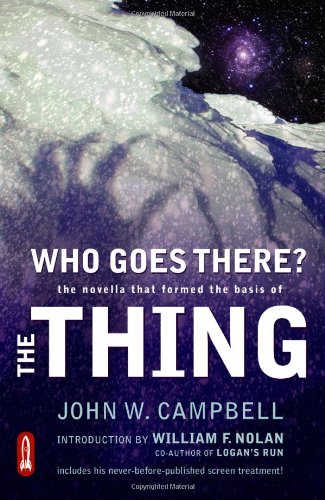 Since I’m pressed for time (the deadline clocks are tick-tick-ticking…), I’ll share with you some quick thoughts. WHO GOES THERE? is indeed worth your time, and there are some flaws in it (and by sharing one criticism, I’m not saying I write better stuff than Campbell; I’m simply sharing one criticism as a reader). I won’t belabor these flaws but will instead point out one: the characters “speech” at each other rather than speak with each other. And the speeches they direct at one another do begin to take on a disconcerting uniformity. The voice of these speeches is florid, tangential, and a bit pretentious. So at times I found this to be distracting.

Having said that, WHO GOES THERE? is a gripping read that deserves its status as a seminal piece of horror and science fiction. There’s a reason why it inspired several films—it’s an awesome and awe-inspiring concept. From the Goodreads description:

“Who Goes There?”: The novella that formed the basis of “The Thing” is the John W. Campbell classic about an antarctic research camp that discovers and thaws the ancient, frozen body of a crash-landed alien. The creature revives with terrifying results, shape-shifting to assume the exact form of animal and man, alike. Paranoia ensues as a band of frightened men work to discern friend from foe, and destroy the menace before it challenges all of humanity The story, hailed as “one of the finest science fiction novellas ever written” by the SF Writers of America, is best known to fans as THE THING, as it was the basis of Howard Hawks’ The Thing From Another World in 1951, and John Carpenter’s The Thing in 1982. With a new Introduction by William F. Nolan, author of Logan’s Run, and his never-before-published, suspenseful Screen Treatment written for Universal Studios in 1978, this is a must-have edition for scifi and horror fans.

The setting is very well-drawn, and the claustrophobia that ensues once things (hah!) begin to go bad is palpable. I was surprised at how similar the 1982 film THE THING was to this tale. Granted, I knew it was “inspired” by the tale, but John Carpenter and company really took pains to utilize all that made the novella so good. The “Thing” in WHO GOES THERE? bears many of the same attributes it possesses in the Carpenter film. The blood test stuff—and if you’ve seen the Kurt Russell film, you certainly remember the blood test sequence—is darn near unbearable. And perhaps most importantly of all, the eerie sense of isolation is just as powerful in WHO GOES THERE? as it is in Carpenter’s film.

So go read it. And when you’re done with that one, grab a copy of the first installment of my serial novel SAVAGE SPECIES. Part One: Night Terrors is still free, the next three installments are cheap, and the final section is set to be released in two days.

2 thoughts on “WHO GOES THERE?: A Short Review of the Novella That Inspired THE THING”