Hey, friends. Hope your April has kicked off well. Mine has, both writing-wise and otherwise, and I’ll be bringing you some updates soon. For now, though, I want to talk about something else.

I want to talk about Sundance’s television show HAP AND LEONARD.

Full Disclosure: I’ve been a Joe R. Lansdale fan for many years. I first encountered Joe’s work as a sophomore in college (a nasty shocker of a novel called THE NIGHTRUNNERS) and have been in love with his writing ever since. So, sure, I’m predisposed to like anything based on his work. Last summer, I got to meet the man himself, and after I picked my jaw up off the floor and managed to form a coherent sentence, I got to talk with him for a good while. I’m happy to report he’s as kind and down-to-earth as any person I’ve ever met.

But it just so happens that you don’t need to be a Lansdale fan to appreciate HAP AND LEONARD. Take my wife…

When I first mentioned the series, she cocked an eyebrow at me and asked me why we should watch it instead of, say, HOUSE OF CARDS or BETTER CALL SAUL.

“Well,” I muttered, “because I hear it’s good. And because the source material is by one of my favorite writers.”

A few months later, I finally wrangled her into watching it, but on the condition that if it wasn’t good, we’d shut it off halfway through first episode.

So at the halfway point, I paused and looked at her. “Well?” I asked.

She scowled at me. “Why did you pause it?”

“Turn it back on,” she demanded.

My wife can be very persuasive.

By the time we finished, she was gushing about how fantastic the characters were and how hilarious the dialogue was. She wondered aloud about where the plot would go, and frankly, I wondered too. See, it had been quite a few years since I’d read SAVAGE SEASON, the first Hap and Leonard novel, and while I’d loved it back then, the years tend to fog most details. In this way, I get to discover these stories anew.

So let’s launch into my list of six reasons why you need to stop whatever you’re doing and watch this outstanding show. Tonight. 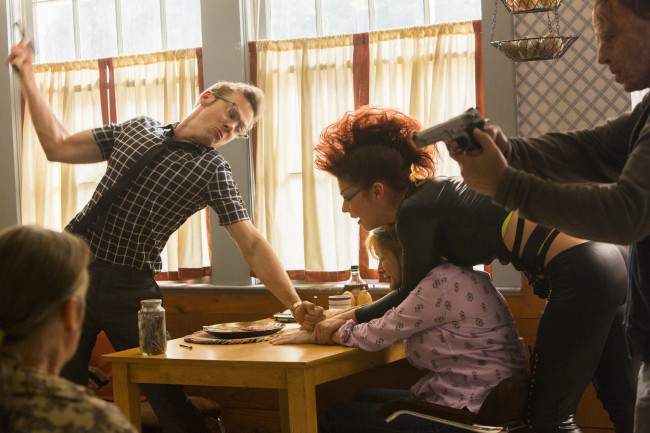 Weird that I’d start with a specific episode, isn’t it? But I am weird, so this sort of fits. Folks, if you’re into Quentin Tarantino movies or David Fincher or anything else that makes your teeth rattle from the suspense, you’re in for a treat. This episode contains a scene that rivals in intensity the opening of Inglourious Basterds or the hypodermic needle scene from Pulp Fiction. I remember sitting there in bed with my jaws clenched and my fists in trembling knots as Hap and Leonard and another character you’ll care about faced probable death and even likelier disfigurement. Friends, this is the first thing you should know–HAP AND LEONARD doesn’t flinch. You always get your money’s worth, but sometimes that means suffering through suspense that’ll make your toes curl. 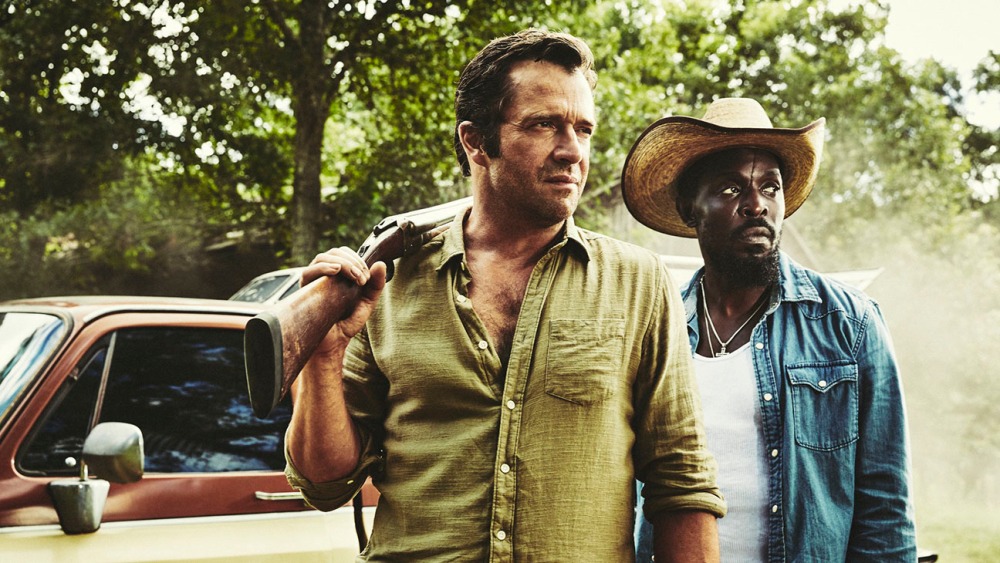 When it comes down to it, this is why we love stories, isn’t it?

Imagine your favorite writer. You doing that?

Then imagine a casting director choosing the perfect actors for those flesh-and-blood characters.

Before I saw the first LORD OF THE RINGS movie, I read a review in which the critic said something like, “They didn’t cast Ian McKellan as Gandalf. They went out and found Gandalf.” This is how I feel about Hap Collins and Leonard Pine.

I can’t imagine another actor conveying the same mixture of defeatedness and determination as James Purefoy does. Purefoy expresses more with a glance than most actors do with a monologue. In another artist’s hands, Hap Collins might be maudlin or infuriating. But because of Purefoy’s nuanced performance we genuinely care about Hap; we see more in him than he sees in himself. We root for him.

That’s because of James Purefoy. He is Hap Collins.

Michael K. Williams’s Leonard Pine is equally incredible. His sardonic retorts are incisive because he utters them with such surprising restraint. How do you show an audience the wounded rage brought on by a lifetime of facing multiple forms of prejudice? You create a flesh-and-blood character who sticks up for the downtrodden and then refuses to accept the credit. And the moment you think someone–other than Hap, with whom he shares a brotherhood deeper than blood–might get close to Leonard, he shoves them unceremoniously away. Yet we like him even more because of it.

It takes a supremely talented artist to pull that off. Thankfully, that’s exactly what Michael K. Williams is.

I’ll not bore you with phrases like shot composition and telephoto lens, but I will tell you that Jim Mickle and the other directors of the series have both an eye for memorable images and an instinctive grasp of visual storytelling. The direction and cinematography of HAP AND LEONARD are top-notch and very much like watching a series of one-hour feature films. Take this shot:

Friends, every shot in this series is visually interesting.

Add to that razor-sharp editing, pitch-perfect original music, and (of course) rich, textured writing, and you’ve got a riveting movie every time you sit down for an episode.

An aside: My family and I recently watched the remake of BEAUTY AND THE BEAST. We loved it. My kids loved it because it was entertaining, and though my wife and loved it for that reason too, for us there was something else happening that set the movie apart from other remakes and CGI extravaganzas.

Even though the story is a timeless one, it is also a timely one. There are scenes in which fear of The Other are given center-stage. Specifically, the moment in which Gaston incites the crowd against the Beast resonated with me because of how persuasive Luke Evans’s character is shown to be and how willingly the villagers follow his hateful lead.

In this way, HAP AND LEONARD is similar: timeless and timely.

I don’t like movies that preach to me, and I don’t like to be told how to think. But darn it, I want stories to tell the truth, even if they’re about people who never existed doing things that never happened.

HAP AND LEONARD tells the truth. You can’t watch it and fail to miss the social commentary. But what’s so marvelous is how organic it is to the plot. There’s nary an impassioned plea for equality or a strident call to action to be found. 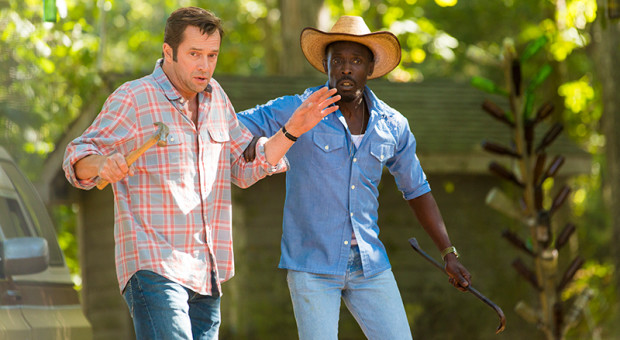 Pace is all-important in storytelling, and folks, HAP AND LEONARD rockets along like a Japanese bullet train. In every episode I’ve seen, I only realize it’s ending when we’re a minute or so from the credits. If you’re new to this blog, you might not know I’m an author and a teacher of film and creative writing, so yeah, I’ve studied a few books and movies in my life. But even though I read and watch just about everything with an analytical eye, I’m always transported by HAP AND LEONARD. It’s not just great art–it’s fantastic storytelling.

Now might be a good time to bring things to a close by returning to His Ownself, Joe R. Lansdale. The best individuals in every field make the difficult look easy. Michael Jordan in basketball. Eddie Van Halen on the guitar.

The fact is, though you don’t see Mr. Lansdale on the screen, you still see him on the screen. Jim Mickle and his team are smart enough not to mess with a good thing, and thus far, the television show has borne a remarkable resemblance to Mr. Lansdale’s Hap and Leonard books.

That’s a darn good thing. Because Joe knows how to make you laugh, bite your nails, engage your intellect, and pluck your heartstrings. Sometimes he does all that in a single paragraph. If you don’t think such a feat is possible, I challenge you to pick up one of his novels. Heck, start with SAVAGE SEASON, or if you’d rather remain unspoiled for the TV show, check out THE BOTTOMS or PARADISE SKY or LEATHER MAIDEN. I’m of the opinion you can’t go wrong with a Joe R. Lansdale novel, and I suspect you’ll feel the same way after you read him.

So watch HAP AND LEONARD.

It’s one of the best shows to hit television (and Netflix!) in the last decade.

And if you’re not convinced yet, I’ll leave you with Pollyanna McIntosh. You don’t want to get on her bad side. 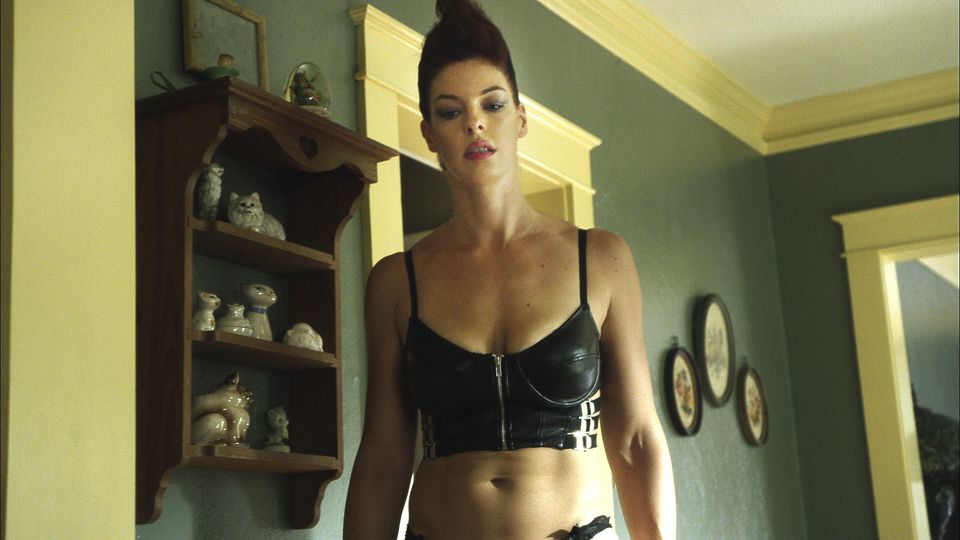