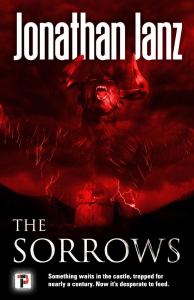 THE SORROWS The Sorrows, an island off the coast of northern California, and its castle have been uninhabited since a series of gruesome murders in 1925. But its owner needs money, so he allows film composers Ben and Eddie and a couple of their female friends to stay a month in Castle Blackwood. Eddie is certain a haunted castle is just the setting Ben needs to find inspiration for a horror film. But what they find is more horrific than any movie. Something is waiting for them in the castle. A malevolent being has been trapped for nearly a century. And he’s ready to feed. BUY NOW

HOUSE OF SKIN Myles Carver is dead. But his estate, Watermere, lives on, waiting for a new Carver to move in. Myles’s wife, Annabel, is dead too, but she is also waiting, lying in her grave in the woods. For nearly half a century she was responsible for a nightmarish reign of terror, and she’s not prepared to stop now. She is hungry to live again…and her unsuspecting nephew, Paul, will be the key. Julia Merrow has a secret almost as dark as Watermere’s. But when she and Paul fall in love they think their problems might be over. How can they know what Fate―and Annabel―have in store for them? Who could imagine that what was once a moldering corpse in a forest grave is growing stronger every day, eager to take her rightful place amongst the horrors of Watermere? BUY NOW

THE DARKEST LULLABY The old house waited. For years there had been rumors that the owner, Lilith Martin, had been part of an unholy cult. People spoke of blasphemous rituals, black rites filled with blood, sex…and sacrifices. Then Lilith died and the house sat empty. Until now. Lilith’s nephew, Chris, and his wife, Ellie, are moving in. Ellie isn’t happy about living in such a dark, foreboding place, but she wants to get pregnant and this house has a lot more room to raise a baby than their apartment. Unfortunately, she and Chris will soon learn that Lilith has other plans. BUY NOW

SAVAGE SPECIES Jesse thinks he’s caught a break when he, Emma (the girl of his dreams), and her friend are assigned by their newspaper to cover the opening weekend of a sprawling new state park. But the construction of the park has stirred an evil that has lain dormant for nearly a hundred years, and the three young people―as well as every man, woman, and child unlucky enough to be attending the Algonquin Falls grand opening―are about to encounter the most horrific creatures to ever walk the earth.  BUY NOW

DUST DEVILS When traveling actors recruited his wife for a plum role, Cody Wilson had no idea they would murder her. Twelve-year-old Willet Black was just as devastated the night the fiends slaughtered everyone he loved. Now Cody and Willet are bent on revenge, but neither of them suspects what they’re really up against. For the actors are vampires. Their thirst for human blood is insatiable. Even if word of their atrocities were to spread, it would take an army to oppose them. But it is 1885 in the wilds of New Mexico, and there is no help for Cody and Willet. The two must battle the vampires―alone―or die trying. BUY NOW

THE NIGHTMARE GIRL When family man Joe Crawford confronts a young mother abusing her toddler, he has no idea of the chain reaction he’s setting in motion. How could he suspect the young mother is part of an ancient fire cult, a sinister group of killers that will destroy anyone who threatens one of its members? When the little boy is placed in a foster home, the fanatics begin their mission of terror.
Soon the cult leaders will summon their deadliest hunters―and a ferocious supernatural evil―to make Joe pay for what he’s done. They want Joe’s blood and the blood of his family. And they want their child back. BUY NOW

WOLF LAND Aside from a quaint amusement park, the small town of Lakeview offers little excitement for Duane, Savannah, and their friends. They’re about to endure their ten-year high school reunion when their lives are shattered by the arrival of an ancient, vengeful evil.
The werewolf. BUY NOW

CHILDREN OF THE DARK Will Burgess is used to hard knocks. Abandoned by his father, son of a drug-addicted mother, and charged with raising his six-year-old sister, Will has far more to worry about than most high school freshmen. To make matters worse, Mia Samuels, the girl of Will’s dreams, is dating his worst enemy, the most sadistic upperclassman at Shadeland High. Will’s troubles, however, are just beginning. Because one of the nation’s most notorious criminals—the Moonlight Killer—has escaped from prison and is headed straight toward Will’s hometown. And something else is lurking in Savage Hollow, the forest surrounding Will’s rundown house. Something ancient and infinitely evil. When the worst storm of the decade descends on Shadeland, Will and his friends must confront unfathomable horrors. Everyone Will loves—his mother, his little sister, Mia, and his friends—will be threatened. And very few of them will escape with their lives. BUY NOW 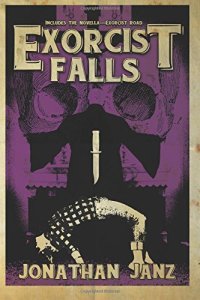 “
EXORCIST FALLS “A perfect choice for those missing old-school Stephen King.” –The Library Journal on Children of the Dark “A horror storyteller on the rise.” –Booklist “One of the best writers in modern horror to come along in the last decade. Janz is one of my new favorites.” –Brian Keene Chicago is gripped by terror. The Sweet Sixteen Killer is brutally murdering young women, and the authorities are baffled. When the police are called to an affluent home in the middle of the night, they learn that a seemingly normal fourteen-year-old boy has attacked his family. The boy exhibits signs of demonic possession, and even more troublingly, he knows too much about the Sweet Sixteen killings. Father Jason Crowder, a young priest assigned to the case, must marshal his courage in order to save the boy and the entire city from the forces of evil. But this is a darkness mankind has never encountered before. It craves more than blood. And it won’t rest until it possesses Father Crowder’s soul. Jonathan Janz’s brand new release brings the original novella that started it all—Exorcist Road—and a brand-new full-length novel (Exorcist Falls) together for a shattering experience in supernatural terror. BUY NOW

THE SIREN AND THE SPECTER When David Caine, a celebrated skeptic of the supernatural, is invited by an old friend to spend a month in “the most haunted house in Virginia,” he believes the case will be like any other. But the Alexander House is different.
Built by a 1700s land baron to contain the madness and depravity of his eldest son, the house is plagued by shadows of the past and the lingering taint of bloodshed. David is haunted, as well. For twenty-two years ago, he turned away the woman he loved, and she took her life in sorrow.
And David suspects she’s followed him to the Alexander House. BUY NOW 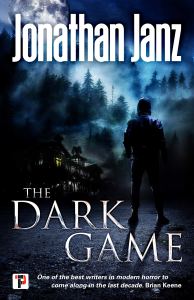 THE DARK GAME Ten writers are selected for a summer-long writing retreat with the most celebrated and reclusive author in the world. Their host is the legendary Roderick Wells. Handsome, enigmatic, and fiendishly talented, Wells promises to teach his pupils about writing, about magic, about the untapped potential that each of them possesses. Most of all, he plans to teach them about the darkness in their hearts.
The writers think they are signing up for a chance at riches and literary prestige. But they are really entering the twisted imagination of a deranged genius, a lethal contest pitting them against one another in a struggle for their sanity and their lives. They have entered into Roderick Wells’s most brilliant and horrible creation.
The Dark Game.  BUY NOW
COMING SOON!

THE RAVEN Fearing that mankind is heading toward nuclear extinction, a group of geneticists unleash a plot to save the world. They’ve discovered that mythological creatures such as werewolves, vampires, witches, and satyrs were once real, and that these monstrous genetic strands are still present in human DNA. These radical scientists unleash the bestial side of human beings that had been dormant for eons, and within months, most people are dead, and bloodthirsty creatures rule the earth. Despite the fact that Dez McClane has no special powers, he is determined to atone for the lives he couldn’t save and to save the woman he loves. But how long can a man survive in a world full of monsters? PREORDER NOW
ANTHOLOGIES: 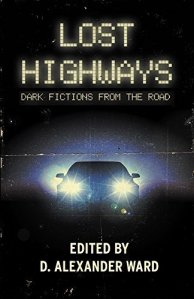 The highways, byways and backroads of America are teeming day and night with regular folks. Moms and dads making long commutes. Teenagers headed to the beach. Bands on their way to the next gig. Truckers pulling long hauls. Families driving cross country to visit their kin.
But there are others, too. The desperate and the lost. The cruel and the criminal.
Theirs is a world of roadside honky-tonks, truck stops, motels, and the empty miles between destinations. The unseen spaces.
And there are even stranger things. Places that aren’t on any map. Wayfaring terrors and haunted legends about which seasoned and road-weary travelers only whisper.
But those are just stories. Aren’t they?
Find out for yourself as you get behind the wheel with some of today’s finest authors of the dark and horrific as they bring you these harrowing tales from the road.
Tales that could only be spawned by the endless miles of America’s lost highways.

So go ahead and hop in. Let’s take a ride. BUY NOW

WELCOME TO THE SHOW We all know the old cliché: Sex, drugs and rock and roll. Now, add demons, other dimensions, monsters, revenge, human sacrifice, and a dash of the truly inexplicable. This is the story of the (fictional) San Francisco music venue, The Shantyman.

In Welcome to the Show, seventeen of today’s hottest writers of horror and dark fiction come together in devilish harmony to trace The Shantyman’s history from its disturbing birth through its apocalyptic encore.

Bring your curiosity, but leave your inhibitions at the door. The show is about to begin…